RasClock is a highly accurate real-time clock that fits on any (May 2016) version of the Raspberry Pi and uses a battery backup to retain the time.

All versions of RasClock are functionally identical and all are built in the UK. Currently v4.x and v5.0 are being manufactured.

RasClock uses one of the following chips:

All of these have the following features: 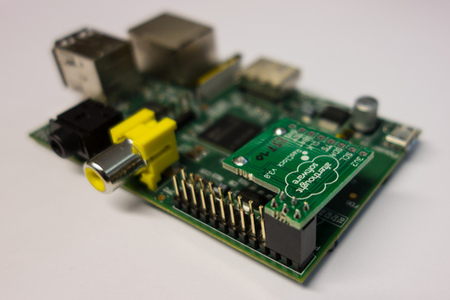 Setting up on Raspbian

The Raspbian versions, Wheezy, Jessie and Stretch already support the RasClock. First ensure this is up to date:

Two changes then need to be made:

If your system has the file /boot/overlays/pcf2127-rtc-overlay.dtb. To enable this add the following line to /boot/config.txt:

After restarting your Raspberry Pi the RasClock should be recognised and you can control it with the hwclock command.

Raspbian Wheezy: (Release 2015-02-16 and perhaps others) you will also have change the two occurrences of --systz to --hctosys

This is due to a change in the underlying debian release. Here is a debian report on the issue.

Getting and Setting the time

The first time you use the clock you will need to set the time. To copy the system time into the clock module:

To read the time from the clock module:

To copy the time from the clock module to the system:

For version 2.0 of RasClock there was no annotation printed onto the PCB indicating pin connections. This is what should have been printed on the bottom of the PCB (i.e. non-component side):

Setting up on old version of Raspbian

These steps are not needed on new versions of Raspbian (where /boot/overlays/pcf2127-rtc-overlay.dtb exists) and are only required for those who want to use the RasClock with an older version of Raspbian. First make sure you have up to date firmware on your SD card. You can download the firmware from GitHub or use Hexxeh’s easy updater tool.

Currently the module requires a driver that is not in the standard Raspbian distribution. The source code is available to build yourself (for both 3.2.27 and 3.6.11), or you can use the binary package we provide.

To install using the binary package you'll need to run the following commands on the Raspberry Pi:

http://www.nxp.com/products/interface_and_connectivity/real_time_clocks/rtcs_with_temp_compensation/PCF2129T.html
There is also an updated version of the binary package (3.6.11).

Please note that this has been updated (22nd October 2013) to correct a problem where the firmware was upgraded and the halt command would then reboot.

To install using the binary package you'll need to run the following commands on the Raspberry Pi:

To configure Raspbian to load the driver at boot, add the following lines to /etc/modules (for the latest kernels and kernel modules use rtc-pcf2127 instead of rtc-pcf2127a):

To register the module at boot time and set the system clock from the RTC, add the following to /etc/rc.local for Rev1 boards:

When the inserted module is called rtc-pcf2127 instead of rtc-pcf2127a:

After you reboot the Raspberry Pi, you should be able to access the module using the hwclock command.

Rest of the World

Buy now on The Pi Hut

Need help with your software or hardware development? View our services